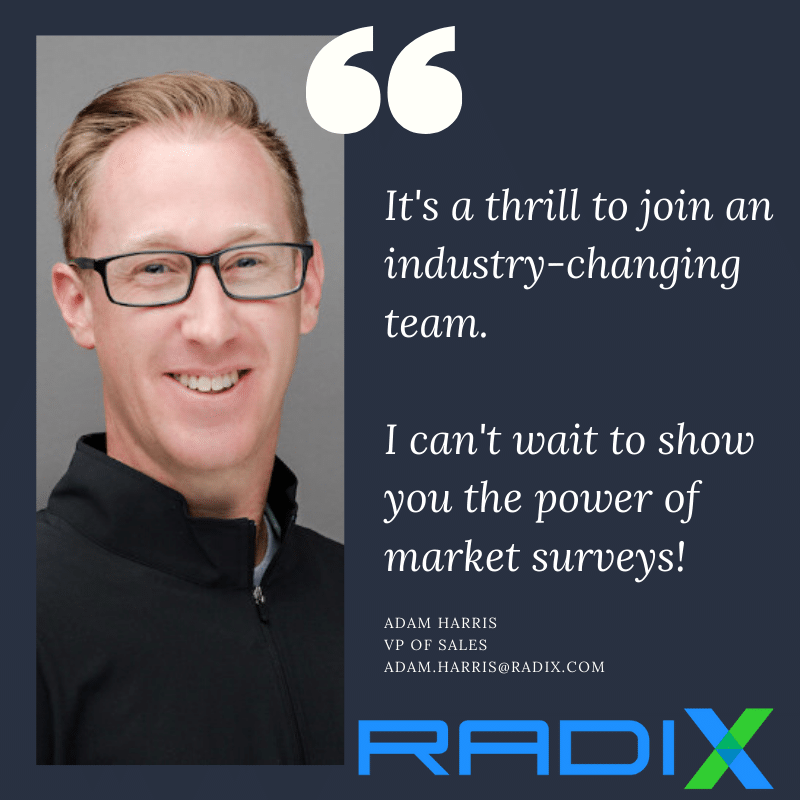 2020 is bound to be an exciting year for Radix. We’re poised for significant growth as more apartment owners and operators realize the benefits of our cutting-edge market-survey platform.

Adam Harris, our new vice president of sales, will help us strategically manage and maximize that growth. A multifamily veteran with invaluable experience on both the operator and supplier partner sides of the industry, Adam is no doubt a familiar face to many of you. And we are beyond excited he has joined the Radix team!

But to help you get to know him a little better, we sat down with Adam recently to get his thoughts on his new job, the multifamily industry and his prowess at Golden Tee.

Give us an overview of your career before joining Radix.

Adam: I started in multifamily in 1997. I worked for a couple of property management companies. I started as a leasing agent, was an assistant manager, a property manager and then ultimately a regional training manager.

I spent most of my time in property management at Archstone – I was there for about six years – and left the industry in 2006. Then, six years later, I came back to multifamily on the supplier partner side when I went to work with Rainmaker selling the LRO revenue management system. I did that until the end of 2017.

I then worked for Nestio before joining Radix last November.

What do you like about working in the multifamily industry?

Adam: I got into it initially because I just like real estate. One day, I want to own apartments and rent them out as a source of income.

I joined the industry to get to know the business. And if you know anything about multifamily, once you get in, it’s hard to get out because there’s just a lot of great people.

There’s a real camaraderie in multifamily – it’s a big industry in a sense, but it feels like a small one as well. You see a lot of the same people, and it’s a tight-knit group. I love that about the apartment industry.

What excites you about being part of the Radix team?

Adam: One, getting to work with Blerim [Zeqiri, CEO and co-founder of Radix] and the rest of the team. I’ve known Blerim since he was at Alliance and was a customer of Rainmaker’s.

There are a lot of smart people at Radix who are solving a problem that is very real in our industry and that nobody else has been able to address. Getting really good information about your comp set has always been a struggle in multifamily, and to be a part of solving that problem is super exciting to me.

As we sit at the beginning of a new decade, how do you see the multifamily industry performing and changing in the years ahead?

Adam: If you look back a decade ago, we were just coming out of a real crisis in multifamily and real estate in general. Ten years ago, I don’t know if people were expecting The Teens to be such a strong decade for multifamily.

Right now, it’s a very strong industry. On the product side, the apartments are just getting so much cooler, so much better – they really fit what prospects and residents want.

At the same time, the number of people who are looking for apartments is growing. It’s just the nature of the way people want to live – as they come out of school, people are not necessarily looking to buy a house. They want to rent a cool apartment and be near things that they can walk to.

So, I think from that perspective the industry is strong.

From the perspective of technology, multifamily has only scratched the surface. Whether it’s AI, machine learning, virtual reality – things of that nature are really just making their way into the apartment industry. There’s so much that technology can and will do to make it easier for property managers to run their communities, lease their apartments, understand the surrounding market, get people approved and get prospects in the door.

What do you like to do to relax and unwind from your job?

Adam: First and foremost, I have two kids – a 5-year-old son and a 2-year-old daughter – and a wife who I adore. So, spending time with my family and getting out and being able to provide experiences for them is probably my number one thing.

When I need a little alone time, I play Golden Tee, which is basically a virtual golf game. I play it competitively and have traveled the country to play in national tournaments. [Adam is the highest-rated player in Georgia and has qualified for the world championship competition the last four years.]

I’ve placed as high as second and third in some national tournaments. I would love to win one, but that would be hard to do. There are guys who play Golden Tee for a living.

Adam: My favorite musicians are the Beatles. For pretty much my whole life, I’ve been obsessed with them. I mean, my son’s name is Jude, after all.

One of my favorite movies is “Good Will Hunting.” It has stood the test of time. I can still watch it today. It’s just a well-written character drama that I love.

My favorite book of all time is probably “The Fountainhead” by Ayn Rand. It’s really about the quest for greatness. Thinking of that reminds me of another one of my favorite movies: “Free Solo,” a documentary about a rock climber’s quest to perform a free solo climb of El Capitan. It really spoke to me: the climber had to be perfect to do that. The higher the stakes, the more focused on perfection you are. To see something with real life-or-death stakes, that was amazing. It puts my life into perspective because, while not everything is life or death, there sure are some incredible people that deserve my attempt at greatness.

Q&A: Jasmine Greene on How Radix Data Is Helping Maverick Residential in the Pandemic

Many Performance Metrics Holding Steady as Summer Comes to an End

How Covid-19 is Impacting Tenant Interest in Phoenix Apartments

Q&A with Jared Wicker, Director of Data at Radix

How Crowdsourcing is Helping Apartment Operators

The Importance of Market Surveys in Student Housing

National Apartment Association
How to Get the Right Data

Is Web Scraping the Answer?

In the Beginning:
BI:Radix Helps Redwood Residential and Maverick Residential
Get Off on the Right Foot

The Competition: Your secret pricing power

Rental Data Delays Are Not OK

Why Now is the Time to Stop Using Excel